It is with great sadness that we bid farewell to former American Farm School President David Wesley Buck, who passed away a few days ago.  David served as president from 1999 to 2004 and will be remembered for his kindness and warmth by everyone who knew him at the American Farm School.

President Dr. Panos Kanellis sent flowers to his wife Patti along with a message conveying his sincerest condolences for her loss. A tree will be planted on campus in his memory. 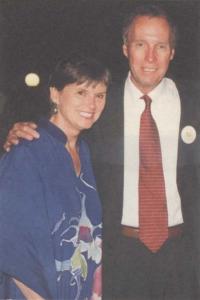