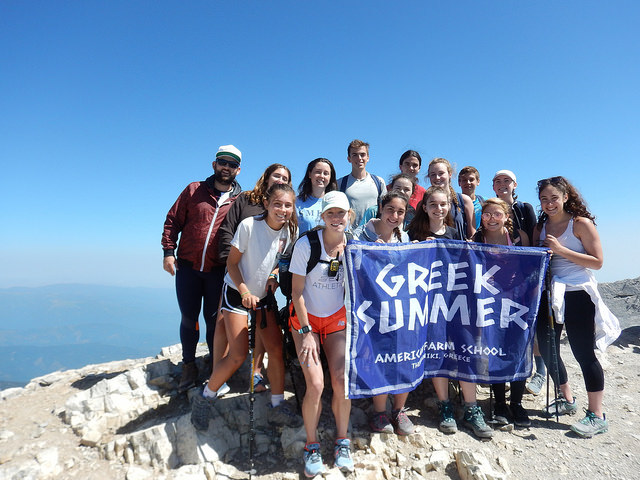 In July, AFS welcomed 16 high school students from nine U.S. states, Bulgaria, and Saudi Arabia for the 48th annual Greek Summer program. Over the course of their month-long journey across Greece, each participant was challenged to step outside their day-to-day comfort zone and engage with something bigger.  They got dirty on our campus farm, planting aromatic herbs and working in the dairy.  They gave back to their homestay village over a week-long English language camp for local elementary school kids. They reached new heights (literally) during their two-day trek to the summit of Mount Olympus. And on their final morning in Athens, no one could believe it was time to, or wanted to, say goodbye.

The students began their adventure on the American Farm School’s campus in Thessaloniki learning about local food production and consumption, as well as rural traditions and customs. At the Honey Park they learned about the life cycle of bees and sampled over 20 different types of Greek honey.  They took in the ancient wonders of Thessaloniki on an investigative tour of its churches and markets and picked up some Greek dancing essentials with our one and only Zina showing the way.  The first 10 days in Thessaloniki set the foundation for the participants’ homestay experience in the village of Stavroupoli, Xanthi.

The group arrived in the homestay village on a Sunday evening, eager but nervous, too, to meet their new families. After a dinner and introduction, the bouzouki music began and brought everyone to their feet, nerves having faded away. The next week brought fun afternoons at the pool with host families, a rafting excursion on the local Nestos river, and a visit to the nearby brewery and tea farm. Participants also met with community leaders to learn more about the Pontos region and its customs--even sharing a traditional dance or two. In the little time the group was there they clearly left a lasting impression on the village and homestay families--there was a not a dry eye in the group when the time came to leave.

But leave we did, to continue the journey. A two-day trip to Meteora and Vergina showcased the rich cultural history of Greece, from the 1000 year old Greek orthodox monasteries to the 3000 old civilization of Philippos and Alexander the Great, and the impact it has had on today’s society.  And just as the ancient Greeks roamed the sea, so did our participants on a 5-day adventure sailing trip to the Sporades islands. Each day started in a different port, followed by sailing to small inlets and coves to explore the magic of Skiathos, Skopelos and Alonissos. The tour concluded with a whirlwind tour of Athens, where participants raced down the track at the Panathenaic (Kallimarmaro) stadium and took in the magic of the Parthenon on the evening of the lunar eclipse.